The history of the turbo charger dates back to the late 1800’s when engineers were attempting to increase the power output of their engines, by compressing the air drawn into the engine so more could be forced in. A Swiss engineer, Alfred Büchi, in 1925 was the first to be successful with exhaust gas turbo charging and managed to gain a 40% power output.

Around the late 1970’s and early 1980’s turbos we introduced by motor manufacturers in their diesel cars and trucks to give more petrol ‘driveability’ and to reduce emissions. The addition of a turbo was once seen as a performance component, but in modern cars they are now primarily utilized to lower exhaust gas emissions and fuel consumption while maintaining power. A prime example is the latest Porsche Boxster engine that has shrunk from 6 to 4 cylinders but added a turbo to increase power while cutting fuel consumption. Around 50% of all cars on the road today have a turbo fitted.

The theory of a turbo is to use the waste exhaust gasses from the engine to drive a turbine from one side that will act as a compressor the other side to force more air into the engine. It’s power from nothing in effect. 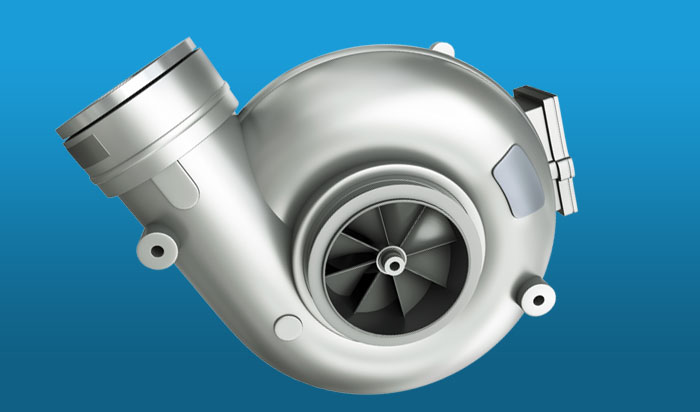 A few interesting facts about turbos –
The turbo lives in a temperature environment between 800-1000 degrees centigrade.
The air entering the compressor end of the turbo will be traveling at around Mach 1 (750+ mph)
The turbo will accelerate from 20 000 revs per minute (rpm) to 150 000 rpm in less than 1 second and the latest, spin up to 220 000 rpm. (A Boeing 747 engines run at 7 000 revs per minute)
An average turbo bolted to an engine running around 2500 rpm will swallow 130 cubic feet of air per minute – which is the volume of a Ford Transit van.

There is no bearing as such in a turbo, it runs on a film of pressurized engine oil. So cleanliness of the oil and good filtration of the air that hit the impellor blades is critical. Many people see turbos as a weak component that is prone to failure, but with care and a little maintenance they should last the life if the car.

Warm them up and cool them down slowly, by not driving too hard until the engine is fully warm and allowing the engine to idle for a minute or two before switching it off, especially after a motorway run.

Always flush the engine oil and replace with the correct recommended grade at least once a year. The turbo is often the first in the queue for problems when service intervals are missed.
The air filter should be original equipment (OE) or OE standard.