Introducing our car of the month at Brownings: Morgan 3 Wheeler

By adminJuly 19, 2016Brownings News
No Comments

For us at Brownings the interesting car of the month is this fantastic Morgan 3 Wheeler. Many thanks to Keith Oliver for allowing us to use it in our news letter and allowing us to work on the cars in his amazing, eclectic car collection.

Morgan was founded in 1909 on a principle of fitting a powerful motorcycle engine and simple gearbox into a light-weight chassis. The early cars were 3 wheeler and were known as ‘Cyclecar’. By the outbreak of the First World War Morgan’s had won numerous British and world records for various classes of cyclecars, Gold medals for reliability trials and had extensive race track victories. Production ceased during the war, but restarted in earnest in 1918 and it was one of the first manufacturers to install front brakes. The famous J.A.P twin engine was generally the power unit of choice. 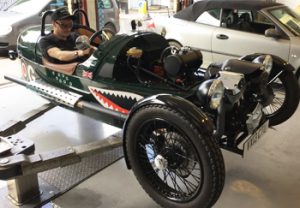 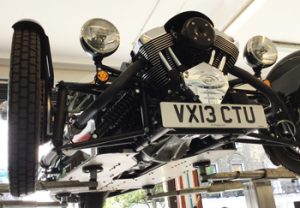 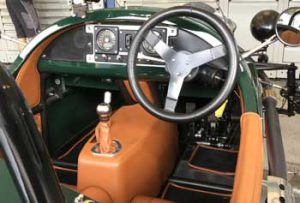 3 wheeler production ceased in 1953 due to lack of popularity, but Morgan revived production in 2011. A modern V-twin is used and a Mazda 5 speed gearbox, using the same powerful engine in a light chassis combination that harks back to the original ethos.

Dry weight is 525kgs making it a class 4 for MOT testing and a Harley Davidson Screaming Eagle engine has been fitted. Top speed is 115 mph. It has caused as much interest from passers by and customers as the E-type Jags and AC Cobra we have in periodically and is 10 out of 10 for fun factor to drive.